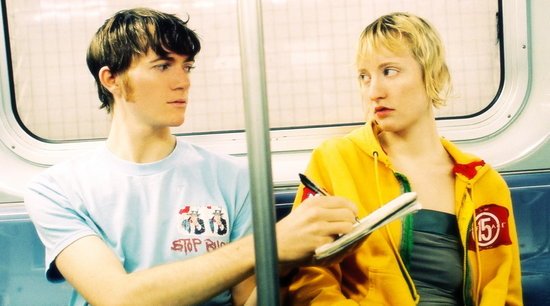 I have been watching the progress of Arin and Susan with their project, the Four Eyed Monsters film, for quite a while now. They have been showing their story through podcasts, blog posts, and newsletter updates. They have been using just about every media available to help with exposure for their work. They have presented an intriguing way to gain the interest of their audience. They are determined and creative. However, they still need help.

The internet has allowed people to decide what they want to watch and hear while pushing aside much of the pre-processed material that tends to get thrust out into the public. Arin and Susan have gained many fans on their own without the usual distribution methods and old dictated process of having a film created and made available to the public.

Along their journey, they also selflessly help to promote others in the music and media world.

I wanted to share Arin and Susan’s story with you, so I asked to collaborate on an interview with them….
[Wendy Shepherd] When did your journey begin with the Four Eyes Monsters project?

[Arin Crumley] Well I guess pretty much when we met each other in September of 2002. But we started working on the film to convey our experiences around November of 2003. Finished a rough cut about a year later, showed the rough cut at Slamdance 2005, then showed a less rough in our self distribution theatrical release in September of 2006 and finally had a final cut we released on the DVD off our website on March 31st of this year. So its been a long road.

[Wendy] When you started the project, did you have any experience or education in the film field?

[Arin] I had a lot of technical experience in shooting and editing video and Susan had been learning for a year. She has a fine art background and I didn’t go to college.

[Wendy] With Episode 1 “In the beginning”, you expressed how you were creative, but not able to find a way to communicate it. How have things changed since the beginning, now that you have given everyone a window to view your world and your relationship.

[Arin] Hmm. Still trapped inside the confines of my brain. But I guess maybe I’ve let others peer in?

[Wendy] In Episode 1, you mentioned how you started your project. Did you quit your jobs to be able to work as needed on the project? How many hours a day did you tend to put into the creation process?

[Arin] Well this project has been 10 to 18 hour days or longer for about 3 and a half years. Yes, I know, crazy. But sometimes we’ll take a day off for rest or for paid work. But no real jobs. Just “gigs” basically. But this is like once a week at the most, and more for Susan then for me, I pretty much never take gigs anymore, there just isn’t time. So we go without money if we have to.

[Wendy] In Episode 1 & 2 “The Investment”, you mentioned how financing the film was done by using credit cards and help from family. Were you aware of how much it would cost to create this film? Was it impossible to get any financial investor backing for your project?

[Arin] Yes, it was impossible to get a financial backer. We had no track record of any kind. No script. No indication that we had anything. Just some ideas in our heads. And further more, to have tried to first convey this all to some backer would have killed our process. Similar to the reason we don’t have backing for our next project. And if we can’t even get backing for our next project, surely there is no way in gods name we could have done it for our first.

[Wendy] Was the Four Eyed Monster website created in the beginning of the project? Did you design and set it up yourself?

[Arin] We made www.foureyedmonsters.com a few weeks before going out to slamdance in 2005. We needed a place for their site to link to. The way back machine has a pretty funny early version of our site. It was nothing like the RSSing, podcasting, blogging, open source 2.0 mega word press site we have today.

[Wendy] What other types of internet avenues did you use? (I remember trying to make it to the Second Life screening, but my computer wouldn’t cooperate while in there.) Which avenues were the most valuable to bringing new viewers? What seemed to be the hardest to deal with?

[Arin] Podcasting. Simple. That is the future of entertainment. Bits of media that come to you automatically if your subscribed. No TV channel has that. No major studio has that. No radio DJ has that. When we make a new video or have a new trailer or post a new short episode or have a video invitation, our subscribers get it. They’ve basically pleged by subscribing that they want to hear from us. They want to know what we are up to and see what ever we make and put up there. It’s the single most powerful thing we’ve done online and it’s the reason we were able to do everything else we’ve done online. Once you have a fan base, you can mess around, experiment, do crazy things like screen the film in the 3D world of Second Life and have avatars sitting in theater seats in a virtual space. That was probably taking things too far by the way, but it’s been fun experimenting in this world of media and technology innovation that is being re-invented before our eyes.

[Wendy] In Episode 3 “Pretend”, I love how you show the real and genuine side of working on the project through these episodes. You started developing problems in your relationship due to the stress involved in getting the film ready for the Slamdance film festival. Is there anything you would have done differently if you got to do it all over again?

[Arin] Relationships and projects are not the same thing. But at the time the Episode 3 material was filmed, we thought they were the same thing. That’s how in it we were.

Episode 6 “Inside the Acting Studio”,

Episode 7 “If you give a mouse a cookie…” and

You show how you had a stalled moment, a roller-coaster ride of emotions, exhaustion, a break in trust during your trip to Slamdance, and relationship breakdowns. They are dramatic episodes showing what can happen in the film industry. Do you feel as though you were taken advantage of since you were new to the process? Would you have contracts and specific roles written up in the future and do things a bit more formal?

[Arin] No. I don’t plan to use contracts in the future. In fact, I plan to get even more organic with the collaboration. And I think the solution to the credits problem is meta data. That’s all everyone wanted. They just wanted a way to know who was in-front and who was on set for every scene. Our next project is going to have meta data like that. And then there can be no credits because it’s all accessible online.

They say it’s bad to wait until a project is done to then go in and try to get contracts, I agree, if you have a normal project with normal roles, absolutely, but if you want to be fluid, I stand behind not asking people to sign until the end, that way you can know for sure, it hasn’t hurt the work in anyway.

The other thing to do is have people sign something the moment you meet them. Honestly, I’ve done that too, had people sign releases when they come to the audition, then forget all about it.

Bottom line, contracts are weird. They just are. They rub everyone the wrong way. They keep people awake at night. Why, because they relate to money. Which is ridiculous to have had a problem with a film like Four Eyed Monsters that has made no money to speak of. But the second your relationships start having this clinical monetary tinge. That’s when it gets weird. And that’s across the board. Susan and I deciding to marry our finances turned into problems. Actors wondering what their financial compensation for their contributions would be caused problems. And I’d even go as far as to say our connection with our audience has been slightly offended due to us selling t-shirts and DVDs and soon downloads of our feature film. I wish there was another way. I have a big problem with money and what it does to social and collaborative dynamics..

[Wendy] You created these podcast episodes with some incredible music. Did you have pay to use the music or was it a collaborative co-promotion arrangement?

[Arin] Oh my god, more on the money tip. Now so far that’s all been fine. Indie bands are completely fine trading exposure for use of music. They are in the same situation as us, they are running from obscurity and chasing exposure to avoid curling up and dying.

[Wendy] The DVD is now available with original artwork, all of the episodes, and more. I am anxious and look forward to receiving the copy I have ordered. How are things going with this part of the process?

[Arin] As of May 15th we’ve sold 750 DVDs. We are pretty happy about that. But the goal is to sell 5,000 during 2007, so we have to pick up the pace if we are going to get there. That will get us out of debt from making the film. And our future goal will of course be to make more projects once we are in the clear from this one.

[Wendy] Your vision is something that will inspire many people. What are you doing these days to move forward?

[Arin] Well I’ve been writing tutorials for other filmmakers on our website and collecting ideas and experiences for our next project. Susan has been doing photo documentation of various things and editing a bunch of material we will be posting later. And finally, I try to constantly zoom out. I’ve been studying the way our financial system works, how it really works and the corruption there and also paying way more attention to world politics. So what does it matter to be making personal work in a world where humanity is clearly sick on a larger societal scale. Well the answer I have thus far is that if individuals were okay in their lives, if they were okay in their relationships, maybe we wouldn’t have the genocidal and self destructive human race. Maybe we would have a loving-caring, and understanding human race.

Arin and Susan are very talented and can use everyone’s support. 🙂