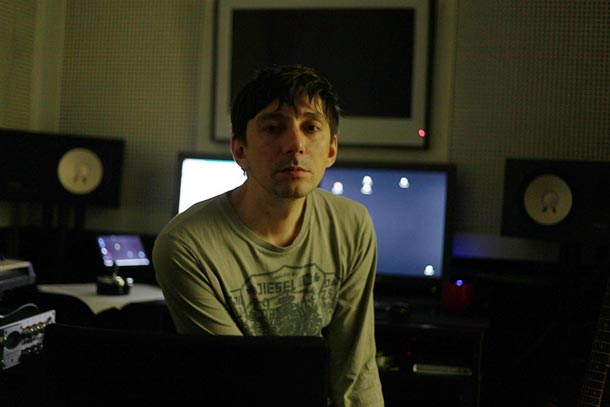 Ivan Markovsky is a Brooklyn-based songwriter, composer, and producer who is part of a duo band called “GAINSAY.” The band’s latest single is titled “Asphalt Mirrors” is currently available on YouTube, Apple Music, and Spotify where Gainsay has amassed thousands of listeners all over the United States and the United Kingdom.

Ivan Markovsky initially worked in Russia as a music writer who created the soundtracks to more than four-hundred commercials for world-famous brands including Pepsi, McDonald’s, Coca-Cola, Samsung, and Orbit. Ivan recently discussed his career as a musical artist and his aspirations for the future.

Meagan Meehan (MM) of Entertainment Vine: What prompted you to enter the field of music and how would you describe your style?

Ivan Markovsky (IM): I grew up with the music I could find on the waves of western radio-stations like BBC and Voice of America. They were illegal in the USSR so it was quite a tricky process. I didn’t think I was going to be a musician when I was a kid – those guys on the radio were like gods to me, you can’t dream about being a god, you know. Then I came across one random Russian rock band on TV. The music was pretty bad, lyrics were stupid and pretentious and I was like “Wow! I can do better than this”. That’s how it started. I never thought about my music in terms of style, I just tried to reproduce what I hear in my head. Styles can be different, the idea is to tune into the right wave like the radio.

MM: How did you get into making music for commercials and which commercial projects were your favorites?

IM: Never had I ever apply for a job in my life, the jobs always found me somehow. My friend worked as a copywriter at the BBDO (Moscow) advertising agency. They had a client who already rejected five of their composers so the agency needed someone new. They liked what I did for them and I started to get new projects with them and other agencies. The advertising business is like a village, everyone knows everyone. A crazy village to be honest. Once a guy that I never met before called me at 11 pm, asking to see me ASAP about making music for a TV ad of a car.
– What is the deadline? – I asked.
– Tomorrow morning.
– Hmm. Do you have a reference track that I should keep in mind while working?
– No.
– Ok, give me an explanation in words, what the music should sound like?
He froze for a minute and I looked at him. He didn’t sleep for three days, he consumed all the cocaine in the world and never thought about how that damned music should actually sound. Then he suddenly switched on and said:
– Tokyo, year 3000.
– That’s it?
– That’s it.
It was the shortest brief I ever got from a client. The next morning I sent him the music, everyone was happy, no corrections were made. If you want to know what music in Tokyo will sound like in the year 3000 – ask me, I know the answer

MM: When and why did you start “GAINSAY” and how was that name chosen?

IM: GAINSAY is a duo. My partner Vova Migunov sings and writes lyrics, and I do the rest of the job. Vova has an amazing, unique voice, and a very special sense of music. We met on Twitter, I don’t even remember the circumstances but let that day be blessed, seriously. GAINSAY is our 50/50 enterprise so I think it’s fair for Vova to join the conversation.

Vova Migunov (VM): I randomly followed this guy who had a scary orange eye as a profile pic and when he tweeted something about making music I DMd him. That’s how we started. The process was very new, we emailed back and forth, occasionally skyped. I had to learn how to explain my music and vision in terms of flowers and rabbits, and Ivan had to learn to understand me.

IM: First time we met in person was in the studio while recording the vocals.

VM: When we finally had a bunch of songs ready to release we really didn’t know what to name ourselves. It was clear that going by our real names is just too long and confusing for everyone. The word “gainsay” just stuck with me when I was preparing for GRE. It has “gain” and “say” in it but when merged together it means something different than I would expect. Also, one of my Instagram followers told me that “gainsay” sounds like “gay insane”, which is quite representative of us and our music.

MM: How many songs have you created so far and do you have any favorites?

VM: We have two EPs out, a bunch of singles and a couple of new songs that we’re working on.

IM: “A couple” means something around twenty. He’s not good at math.

VM: If I was to pick a song to direct listener’s attention to, it would be Cease Fire, which I wrote as my humble tribute to New Orleans music and culture. Another song that I pat myself on the back for is Come Thru. It’s in the works but we put out a shot-with-a-phone video of a singing-to-just-a-guitar version of it on YouTube. It’s my attempt at yet another ironic take on modern dating and I hope people would find it relatable.

IM: My personal favorite is Hiroshima. Oh, and the cover of Gloomy Sunday. To me, that was a dream of a lifetime to make it, but I couldn’t find a vocalist who can sing Billie Holiday’s song and not sound ridiculous. Vova did a great job, his vocals are absolutely perfect on this track. I’m really proud of it.

MM: What is “Asphalt Mirrors” about and what inspired it?

VM: I was in the passenger seat with my new friend driving, we were on the interstate in the midst of our two hours ride from Baton Rouge to Lake Charles. I already knew that last night when we were hanging out we didn’t click and rather sooner than later our thing is going to be over. And as clear as it was, I was in a complete denial about it. While I was thinking about that the pavement in front of us was creating this optical illusion, when on a hot sunny day asphalt appears as a wet reflective surface, just like a mirror. I came up with a hook right there in a matter of minutes and that’s how this song came about.

IM: This is an emotional situation that all of us experienced: running away from places, from people, from yourself. I tried to make the music sound angry, aggressive, brutal, fill it with what you feel when some evil spirit drives you crazy and you run. Or drive. Or make a transatlantic flight. This happened to me so this is a personal thing for me too.

MM: You grew up in Russia and now live in America, so what was it like to adapt to a new culture? What are the biggest differences between the music scene in Russia and the one in the United States?

IM: I grew up in Ukraine and moved to Moscow when I was around twenty. Now I realize that I made a wrong choice. Moving away from Russia is like getting freed after living in a cage. Everything is better out here in the US. I could say Russia is authoritarian, racist, sexist, homophobic, chauvinistic, blah blah blah, and it all will be true. But I’m not a political scientist, I’m a musician, so I’d rather tell how it feels. Imagine you suddenly find out that your close friend is a member of a cult that practiced human sacrifices. And you call another friend in the middle of the night and scream “Did you know? John is in the cult! They’re killing people!” And your friend answers: “Of course I know. Cool guys, huh? We should join them. Btw let’s meet all three of us together at Starbucks tomorrow and discuss that new French art-house movie”. Human sacrifices here isn’t a metaphor. They killed millions for what they call “communism”, now they’re killing for what they call “The Russian World”. And they are fine with it. But cannibals wearing cool hipster jeans and listening to the new Coldplay tune in their Beats headphones are still cannibals to me. The whole Russian culture seems fake. This is how we got to the second question – the music scene in Russia and the US is pretty similar in terms of processes and structures. Musicians reproduce styles and genres of the western music but very few of them are able to produce anything meaningful. They fake forms and say nothing. In contrast, Ukrainian scene looks much more promising. There are musicians with ideas, they have no money, but they will get there.

MM: What are some of your upcoming projects and what are your primary goals for the future of your musical career?

IM: Our goal is to play live. That’s tricky because I live in New York and Vova lives in Baton Rouge. We work hard to make it happen. We also work hard on our new recordings. I’m trying to reinvent the contemporary pop music sound using Chinese instruments. This goes a lot like a scientific research and at the same time like a crazy experiment: what if you take Shakespearian theater actors and ask them to play a Hollywood action movie. Hilarious. And we both are fascinated with the rap culture and we want to make a feature or collaboration with a cool rapper like Young Thug. Hey Young Thug, we love you! Let’s work on something together!

MM: Can you offer any words of advice to aspiring musicians and/or songwriters and is there anything else that you would like to discuss?

IM: I’m not a success (yet) to give people advice. But as a music fan (I still love music, this is the most amazing thing) I can say: find yourself and stay true to yourself. Work hard. And don’t give up. I address this to myself too.
* * * * *
To learn more about Ivan Markovsky, visit his official website and the GAINSAY website. He can also be found on YouTube and Facebook profile.

Music, Kids, and Fun: Interview with Adam Marshall of The Bazillions

“Q & U,” “Similes and Metaphors,” and“Prefix or Suffix?”--these are just a few of the fun, catchy, and underlyingly educational songs by a family-friendly...
Read more